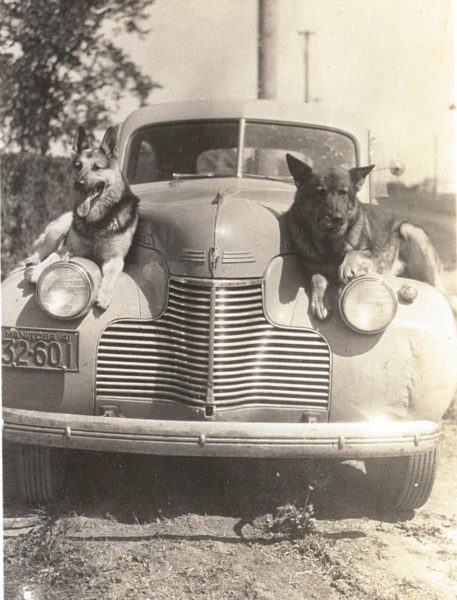 An iconic image from this era features some of the RCMP’s first police dogs: PSD Sultan and PSD Major sitting on the hood of a Manitoba RCMP Police Services Dog Car. The image is from the personal collection of E.B. (Ted) Bailey, a former RCMP officer who was posted to Headingley. RCMP believe Bailey, who passed away in 1991, was an early dog handler for the force. Source: Manitoba RCMP.

Blog: Dogs have played many roles throughout the history of the RCMP

The term “K-9” is short for the species “canine”. All RCMP vehicles with K-9 on the side of the car will have a working police dog in the vehicle.

The Royal Canadian Mounted Police officially welcomed Police Service Dogs into the force with the establishment of the RCMP Dog Section in 1935. Prior to this date, some members of the Force used their own personal dogs in searches for missing people.

The Force had a relationship with dogs even before it started training them as police service dogs. The RCMP’s history with dogs dates back to the 1890s when the North-West Mounted Police (NWMP) stationed in the Yukon took on the responsibility of delivering mail in the winter. These dogs were not considered police service dogs.

In 1898, members and special constables delivered mail by dogsled patrol along a 960 km (600 mile) route between Dawson City, Yukon across the border to Skagway, Alaska. During the winter of 1898-99, the Mounties delivered more than six tons of mail by dogsled and traveled more than 100,000 km (64,000 miles). The NWMP set out on mail deliveries twice a month along this route either on the frozen Yukon River or along rough trails.

During this time, the NWMP hired Inuit as Special Constables to assist local detachments, as many members were unfamiliar with the area and terrain. The Inuit were an essential part of the success of numerous dog sled patrols; they assisted the Mounties whose tasks in these regions ranged from law enforcement to mail delivery.

Members of the Force started using their own personal dogs to assist in searching for individuals as early as 1908. The force’s official Police Dog Section was established in 1935 and consisted of three German shepherds: Black Lux, Dale, and Sultan. Within just two years, the value of the program was evident, and the force established a national training school for dogs in Calgary, Alberta. In 1940, evidence seized with the help of an RCMP police dog helped secure a conviction for the very first time. PSD Black Lux found a liquor cache and that evidence led to a conviction under the Excise Act in February of that year.

The RCMP’s relationship with its police dogs has also been a subject of pop culture. A 1930s radio series “Challenge of the Yukon” introduced listeners to the Mounties and their police dogs. The radio show became “Sergeant Preston of the Yukon” on radio and television in the 1950s and featured Sgt. Preston and his trusty side kick. “Yukon King – an Alaskan Malamute.”

The force has always been attentive to the specific needs of its police dogs. For example, the Police Dog Service unit was the first Unit in the RCMP to have air conditioning as standard equipment in its vehicles. Dogs “see” more with their nose than their eyes. If the dog is hot, they will pant to cool themselves which can affect their ability to track.

Today, there are more than 150 Police Dog Teams in the force. These teams are an important part of frontline policing that search for missing people, track down criminals, remove illicit drugs from the streets, and even sniff out explosives and human remains.