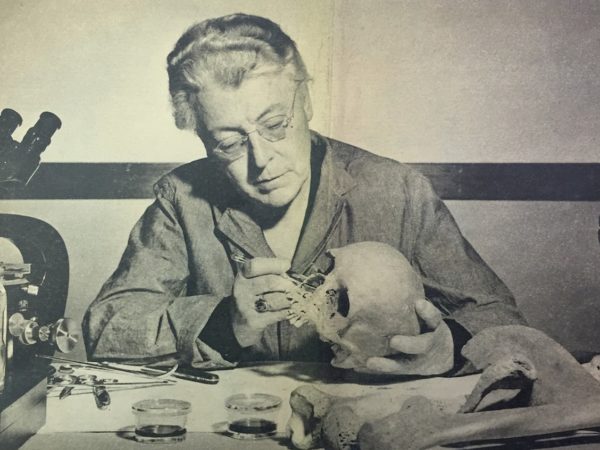 Born in Manitoba in 1877, McGill had lost both parents after they drank contaminated water at the 1900 Brandon County Fair. That experience probably influenced her decision to give up her career as a rural school teacher and train as a doctor at the University of Manitoba.

Upon graduation, McGill interned at the Winnipeg provincial laboratory where she developed her life-long interest in pathology.

In 1918, she moved to Regina to assume her new position as provincial bacteriologist for Saskatchewan. Her office and lab were housed on the top floor of the Saskatchewan Legislative Building, while the animal cages had to be kept on the roof. Four years later, in 1922, McGill was director of Saskatchewan laboratories and provincial pathologist.

But her real calling was found the following year in 1923 when she began to assist the Royal Canadian Mounted Police in their criminal investigations. McGill’s forensic work for the mounted police took her to all parts of the province to deal with puzzling, at times bizarre, deaths.

But she invariably came up with an explanation that made sense of the crime scene.

If the case were particularly intriguing or unusual, she gave it a name–such as the Deserted Shack Murder, the Bran Muffin Case, or the Straw Stack Murders.

In 1937, McGill helped the force establish the first RCMP forensic laboratory and served as director for a number of years. She also provided training in forensic detection methods to new recruits. The police who worked alongside the pathologist marveled at her seemingly tireless energy and her willingness to put aside her own work to help them whenever and wherever her services were needed. This kind of dedication made McGill popular with the force and she was affectionately known as “Doc.”

Dr. McGill’s uncanny ability to determine the cause of death also made her a regular fixture at preliminary hearings, coroners’ inquest, and trials, where she dispensed her forensic findings in a no-nonsense fashion.

The force would later name her Honorary Surgeon in recognition of her service. Even though she retired in 1946, she consulted for the force until her death in 1959.

Author Bill Waiser is a western Canadian historian. He has published over a dozen books–-many of them recognized by various awards.  A World We Have Lost: Saskatchewan Before 1905 won the 2016 Governor General’s Literary Award for Non-Fiction. His latest book, In Search of Almighty Voice: Resistance and Reconciliation, examines the story, legends and myths of Almighty Voice, a member of the One Arrow Willow Cree who died violently in 1897 when the North-West Mounted Police shelled the fugitive’s hiding place.