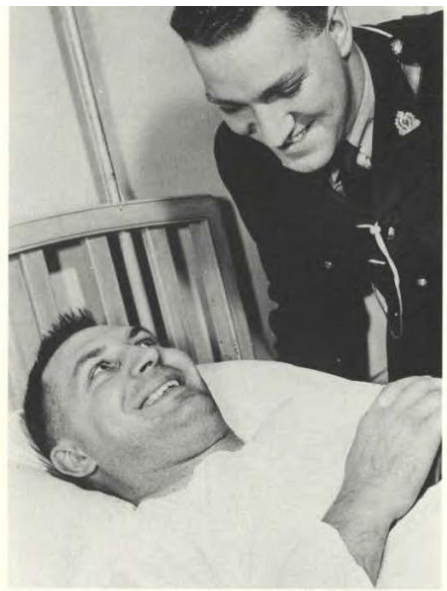 Cpl. Bud Johnstone, recovering from eight bullet wounds, is visited by a fellow officer at Royal Columbian Hospital. Source: Coquitlam 100 Years: Reflections of the Past.

On April 3, 1956, the Coquitlam’s Royal Bank of Canada branch was the scene of a bank robbery that was more Wild West shootout. Not long after the bank opened, three masked men armed with sub-machine guns, revolvers, and a sawed-off shotgun entered the bank, while a getaway driver waited outside. Secretly pressing a concealed alarm button, the bank manager was able to alert Burnaby RCMP who called in the nearby Maillardville Detachment.

Three constables from the detachment (Bud Johnstone, Al Beach, and Bert Schroeder) were on the scene in minutes. The trio ran out of their car with Johnstone heading into the bank first. Twenty-nine-year-old Johnstone was shot several times and fell to the ground. Still bleeding, he was able to get up and chase two of the robbers outside before collapsing. During the gunfire that ensued, one robber was killed, while another was wounded. Two other robbers surrendered while the driver fled. The driver was eventually captured not far from the bank.

In the end, Johnstone had been shot eight times – twice in the right arm, three times in the chest, twice in the left arm, and once in the left leg. He was rushed to the hospital. While in hospital, he was promoted to the rank of Corporal. Johnstone miraculously recovered as none of the bullets had hit his organs. Later that year, he was awarded the George Medal – awarded by the United Kingdom for acts of great bravery.