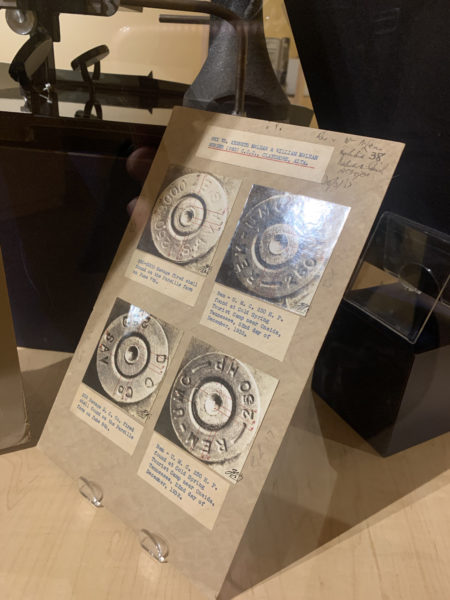 The case was cracked thanks to the quality of the ballistics evidence and forensic work by RCMP Corporal H.W.M. Brace.

During the Great Depression, father and son Kenneth and William McLean were drifters who traveled from Tennessee to Alberta. The pair worked odd jobs at farms across Alberta. Kenneth was no stranger to crime and in September of 1933, he and his son decided they would rob their former employer, William J. Parsille, a farmer in the village of Mannville east of Lloydminster.

The pair drove onto the property and stole Parsille’s wallet and firearm. Parsille was tragically killed in the process and left for dead. The McLean’s sped off, ditching their firearms in the process. The pair made it back to Tennessee and went their separate ways.

Parsille’s body is found in the yard three or four days later by a young man cutting across the field to take a shortcut. By this time, the Maclean’s are long gone, and the case turns into an international, cross-border manhunt. The RCMP are unable to immediately find the weapons used in Parsille’s murder, but they did find bullets.

The Maclean’s are eventually found in Tennessee and returned to Alberta where they stand trial for murder. Father and son accuse the other of killing Parsille. Both were found guilty and subsequently hanged for their crimes.

The case was cracked thanks to the quality of the ballistics evidence and forensic work by RCMP Corporal H.W.M. Brace. As the RCMP had not found the rifle used in the murder, all they had was ballistics evidence to work with. Cpl. Brace was able to match rounds found at the crime scene to rounds found at another location linked to the McLean’s, which connected them to the murder. About three years after the Maclean’s were convicted and hanged, the Ross rifle they had used to kill Parsille was found and connected to them. When tested, it was found to match the ballistics evidence found at the scene of the murder three years earlier.

The Macabre Museum features artifacts from this case including three vials containing ballistic evidence that Cpl. Brace examined and used to draw his conclusions from, as well as pieces of the nooses used to hang Kenneth and William McLean.